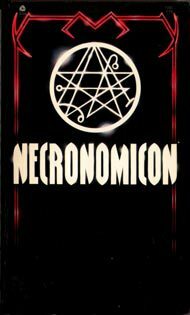 In the past 31 years, there has been a lot of ink—actual and virtual—spilled on the subject of the Necronomicon. Some have derided it as a clumsy hoax; others have praised it as a powerful grimoire. As the decades have passed, more information has come to light both on the book's origins and discovery, and on the information contained within its pages. The Necronomicon has been found to contain formula for spiritual trans-formation, consistent with some of the most ancient mystical processes in the world, processes that were not public knowledge when the book was first published, processes that involve communion with the stars.

In spite of all the controversy, the first edition sold out before it was published. And it has never been out of print since then. This year, the original designer of the 1977 edition and the original editor have joined forces to present a new, deluxe hardcover edition of the most feared, most reviled, and most desired occult book on the planet.

Dead Names: The Dark History of the Necronomicon

The dark history of the Necronomicon––one of the world's most feared and fascinating books––told by the one man who saw it all...and lived to tell the tale.

The Necronomicon is one of the most controversial books ever published. The master of Gothic suspense, H.P. Lovecraft, wrote about a mystical and dreaded grimoire, known as the Necronomicon––an ancient text written by an Arab that, if it were to fall into the wrong hands, could have disastrous consequences. But no one thought the Necronomicon had any basis in the world outside of Lovecraft's fiction. Until...

Simon was a young man drawn to the mysterious world of the occult through his association with several Eastern Orthodox religions and his friendship with the owner of an occult bookstore in Brooklyn. In 1972 he stumbled upon a stolen text in a friend's apartment, unaware that what he held in his hands was the real Necronomicon––something long thought to be a creation of Lovecraft's brilliant mind and deft pen. After an arduous translation, done in the utmost secrecy (since the tome was in fact stolen), Simon and his close circle of friends unveiled the now–infamous grimoire to a clamoring public.

In Dead Names, Simon tells the amazing true story that surrounds the Necronomicon. From the main players' humble beginnings in the pageantry–filled and secret world of Eastern Orthodox religion, to the accidental discovery of the Necronomicon, to the Son of Sam murders, the JFK assassination , the brilliant William S. Burroughs, and the eventual suspicious deaths of almost everyone involved with the grimoire, this book is an enthralling account of a book steeped in legend, lies, and murder.

The mighty powers invoked by this eldritch tome are really long-forgotten psychic abilities, able to affect the most basic needs and desires, including Love, Wealth, Peace of Mind, and Protection Agains Enemies. But now comes a guide that enables anyone to pick up the book and use its ineluctable power "without fear or risk" according to editor Simon.